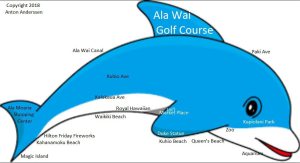 First-time visitors to Hawaii will inevitably hear the word Waikīkī when planning their vacation to this island paradise. For some people, Waikīkī and Hawaii are synonymous; at least for me, when I tell people I own a condo in a skyscraper in Hawaii, I am actually referring to Waikīkī. To many people, Waikīkī is Hawaii, and they never venture beyond said tourist zone; at least on their first trip. Of course, no one can visit just once; I came 39 times before I bought my home here. Due to mountains and rivers and sacred places in this state, the roads are not built on a grid; winding paths crisscross and meander to and fro.

The state of Hawaii officially recognizes 137 islands, including four islands of the Midway Atoll. Some documents refer to 152 islands, but the state is typically recognized by its eight main islands: Hawaiʻi, Maui, Kahoʻolawe, Lānaʻi, Molokaʻi, Oʻahu, Kauaʻi, and Niʻihau. Tourist maps often exclude Kahoʻolawe and Niʻihau, and excursion lists often exclude Lānaʻi and Molokaʻi. That leaves us with Hawaiʻi, Maui, Oʻahu, and Kauaʻi; these are the four islands having non-stop flights to the mainland. The first island, Hawaiʻi, is also known as The Big Island or The Volcano Island or Hawaii Island. Most tourists would go there specifically to see Volcanos National Park, and then return to urban Honolulu, which is located on Oʻahu. Honolulu is both a city and county, so it could refer to both the urban area where most of the people live, or it could refer to all the places included in Honolulu County, including over 100 small islands and atolls in the Hawaiian island chain located northwest of the islands of Kauai and Niihau. Being that the word Hawaiʻi can be ambiguous, as can be Honolulu, it should be no surprise that Waikīkī itself can be ambiguous.

For the purposes of this orientation, Waikīkī is the main tourist neighborhood of urban Honolulu, which fronts the Waikīkī beaches. There are eight sections which make up this two-mile stretch known en masse as Waikīkī. From left to right, they are Duke Kahanamoku Beach at the Hilton Hawaiian Village, Fort DeRussy Beach Park, Gray’s Beach at the Halekulani Hotel, Royal Hawaiian Beach, Prince Kūhiō Beach, Queen Kapiʻolani Beach, San Souci Beach, and Outrigger Canoe Club Beach (also known as Colony Beach).

I invented a way to picture Waikīkī for my students and friends, using the shape of a bottle-nosed dolphin. All of the underbelly would be the Waikīkī beaches. Kapiʻolani Park would be the head and bottle nose, Ala Moana Shopping Center the top fluke, and Ala Wai Golf Course the dorsal fin. If the dolphin were pushing a ball, that ball would be Diamond Head (Lēʻahi) mountain/crater. Behind the dolphin is urban Honolulu. There are three main roads stretching the length of the dolphin; at the top is Ala Wai, which is one-way going left; at the bottom is Kalākaua, which is one way going right. In the middle is Kūhiō, which has two-way traffic, and where most busses stop.

Toward the fluke of the dolphin is the Hilton Hawaii Village. This is an important location because it is the site of the weekly Friday night fireworks. Perhaps the most important location in Waikīkī is the Duke Kahanamoku Statue; this could be considered the very heart of Waikīkī. As a side note to Europeans, the word Duke refers to the famous surfer’s first name, it is not a title of royalty, e.g. Duke of Cambridge (Prince William of Wales). At the surfer’s statue, there are free hula shows on Tuesday, Thursday and Saturday evenings. Behind this spot is the Hyatt Regency, where there are farmers’ markets on Tuesday and Thursday 4 to 8 pm. Behind the Hyatt is King’s Village, where there are farmers’ markets Monday, Wednesday, Friday and Saturday from 4 to 9 pm.

The Royal Hawaiian Shopping center has free lei classes in building B level 3 on Mondays Fridays at 1pm. There is free entertainment at the Royal Hawaiian’s Grove Tuesday to Friday at 6 pm. The free Rock-A-Hula Elvis show is also at The Grove at 7 pm on Tuesday, Thursday, and Saturday.

On Wednesdays, there are farmers’ markets at the Aloha Tower 11 am to 1:30 pm, and Blaisdell Concert Hall 4 to 7 pm; these are located in urban Honolulu. On the first Wednesday of the month, there is free admission to the Honolulu Museum of Art, also in urban Honolulu.

The old International Market place was completely demolished, save the magnificent banyan tree which graces the venue. A new, spectacular shopping site was constructed around the tree. Here, you can watch O Nā Lani Sunset Stories performances, nightly, just after sundown. Honoring the beloved Queen Emma, these nightly shows highlight the stories, traditions and culture of this special gathering place. Performances start September – February: 6:30 pm, March – August: 7:00 pm. On the first Sunday, a free cultural lei-making class is offered from 1 pm to 3 pm. If you can only see one hula show, this is the one to see.

On Sunday, there is a farmer’s market from 9 am to noon at the Ala Moana Shopping Center on level 2 in the parking lot behind Dolce & Gabbana at the Volta Charging Station. On Saturday, a market at Jefferson Elementary School, at the end of Kūhiō Street, where Kapiʻolani Park begins, runs from 8 am to 2 pm. Farmers’ markets often have hot meals served in Styrofoam containers, at bargain prices.

The main venue for festivals is Kapiʻolani Park. If there is a parade, it will likely take place on Kalākaua Avenue, and finish in the park, where vendors typically set up craft and food tents. From time to time, Kalākaua Avenue will be shut down near the Duke Statue to accommodate a hundred or so vendors for festive stall markets.

The eye of the dolphin is the bandstand at Kapiʻolani Park. The Royal Hawaiian Band gives free concerts here on Sunday afternoons throughout the year, depending on their schedule. When there is a music festival of any kind, most likely it will take place at the bandstand.

Although the Waikīkī Beaches stretch two miles, I feel the best area to pitch your umbrella is opposite Kapiʻolani Park. You will find a concession stand and bathrooms here, and it’s not as crowded as the area near the Duke Statue. There is a lifeguard stationed here for added safety, too.

The bottlenose where Paki Avenue and Kalākaua Avenue come together is most likely the farthest point a tourist will wander in Waikīkī, unless you are venturing onward to climb Diamond Head. In this area, there are two Kalākaua Avenues, which can create some confusion; one goes one-way toward Diamond Head (the bottom of the dolphin’s mouth, and the other goes one-way in the opposite direction (where the mouth of the dolphin is).

If you can envision a really big spout rushing out of the blowhole, this would be the general direction where you would find Dolphin Quest (swim with the dolphins), Hanauma Bay Nature Preserve (where thousands of colorful fish come to you) and Sea Life Park (where you can swim with the dolphins and watch sea critters perform tricks).

Magic Island, on the fluke end of the dolphin map, is a good spot for a leisurely stroll, biking, watching the sunset, running, or BBQ picnicking. There are several benches facing the ocean, bathroom facilities, cold showers, lots of shade, and a lagoon that is great for swimming in if you want to avoid strong waves. Bring your reef shoes or crocs because there are a lot of shells on this beach. There is ample free parking, and you might find food trucks selling fresh seafood throughout the day. It’s a fun place to watch surfers, outrigger canoes, and sail boats passing by – and you can enjoy the fireworks every Friday night. This is the area where The Howard Hughes Corporation is creating a playground for the world’s billionaires.

If you are not a billionaire, but you have a Medicare card, be sure to bring it with you to Honolulu. Showing the card lets you ride the bus for $1 per ride, or $2 for an all-day pass. The Bus is very handy when traveling from Magic Island to Kapiʻolani Park.