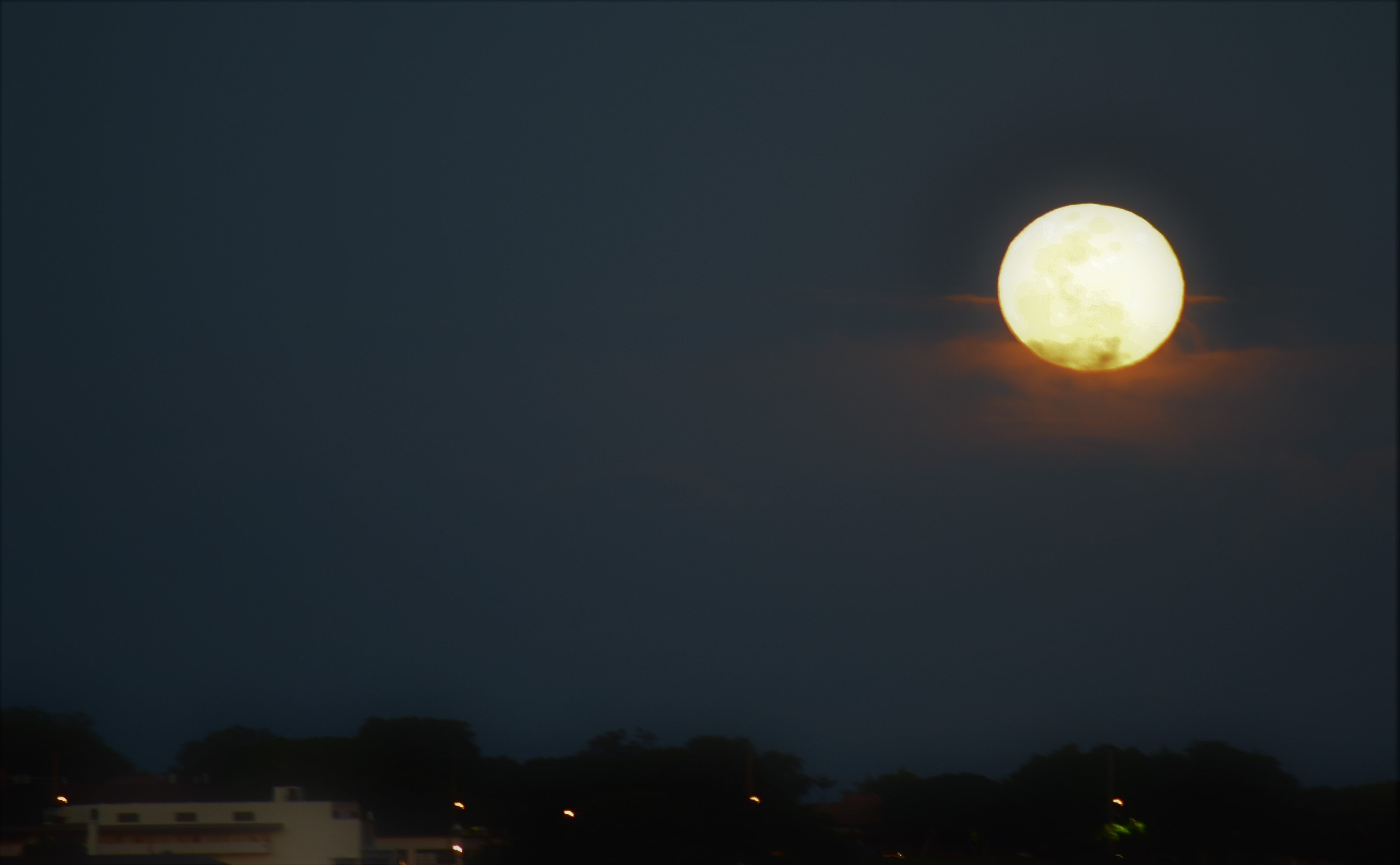 When the full moon rises on the island of Oahu, Hawaiians and their guests make a special journey to one of the most significant cultural sites in the state: Waimea Valley. Known as the “moon walk,” visitors are led throughout the valley as a new world unfolds before them. Waimea Valley is an archaeological treasure, with 78 known surface sites of interest.

Waimea, “The Valley of the Priests,” gained its title around 1090, when the ruler of Oahu, Kamapuaa, awarded the land to the high priest Lono-a-wohi. From that time until Western contact and the overturn of the indigenous Hawaiian religion, the land belonged to the kahuna nui (high priests) of the Paao line. Among the religious structures the priests erected in and around the valley are 2 large heiau, or temples: Puu o Mahuka, Oahu’s largest heiau, situated on a cliff overlooking the valley; and Kupopolo, which stands near the beach on the Waialua side of the river. The valley is also a botanical Garden of Eden, having 35 distinct collections representing some 5,000 taxa from around the world.

Some of the rare and exotic plants in Waimea Valley bloom only at night. These include: (1) Brunfelsia Americana, called “Lady of the Night” for its intense, sweet fragrance, absent during the daylight, yet overpowering at night. The flowers open pure white, then fade to yellow the subsequent day. Its perfume attracts moths who probe the tubular flower’s throat for nectar. (2) Night-blooming cereus flowering ceroid cacti that bloom at night (also during the day but opens up more significantly at night). (3) The Tree of Sadness, Nyctanthes Arbor-Tristis “Night Flowering Jasmine” located at the start of the first bridge. This tree from India blossoms only at night. People sweep up the still fragrant fallen flowers each morning to make perfume and an orange dye.

The Valley was first inhabited somewhere between 930 and 1045 AD, and it was a cultural mecca for experts in the arts and religious traditions. Valley guides try to equate the moonwalk experience to something akin to walking though one’s grandparent’s home late at night. Botanist Duke led guests through the world-class gardens, pointing out the species which bloom nocturnally, ones which do not show their full splendor in daylight hours.

Our moonlight tour took place on “Hua,” the first of four moon phases. The Hawaiian moon phases are: Hua (fruit, egg), Akua (god; the first night of fullness), Hoku (“Stranded moon”), and Māhealani (“hazy, as moonlight”). The Hua moon is when Hawaiians planted seeds and fruits; it is also a night for fishing, as the gravitational pull on the ocean also brought abundant marine life with it. Although the moon showed brightly, we were fortunate in that our tour took place on a breathtaking, starry, starry night.

Kaila Alva, the lead educator at the Valley, gave a beautiful introduction to the evening event; she was also one of two chanters for the evening. She shared: “When we walk through the Valley, we try to keep the mind frame that this area is very special and sacred to Hawaiian people, so we make sure that we walk through respectfully, as well as peacefully. When we walk through we try to observe what appears in the night sky, focusing on specific stars and constellations, and observing the moon phases. The walks are geared toward the full moon, although the walks are not always exactly on the full moon evening.”

“Our lead botanist, David, goes through the extensive collection during the day, and picks plants he knows are going to be blooming at night, so he can be certain to point them out to guests on the tours,” said Alva. “We have 1,875 acres in this valley, and it is one of the last intact ahupua`a (geographical sectors) on Oahu. There are 5 temples in the valley: Pu’u o Mahuka Heiau is located in Pu’u o Mahuka Heiau State Historic Site and is the largest heiau (place of worship) on the island, encompassing over 2 acres. Overlooking Waimea Bay, the heiau is situated 300 feet above the sea on a high ridge. Pu’u o Mahuka Heiau served a critical role in the religious, social, and political system of Waimea Valley, being a major cultural center for the north shore of Oahu in its time.”

“This valley was equated to being a house of knowledge throughout its history. Very special people lived here; the kahuna (wise man or shaman) and kahuna nui (high priests) were famed for living here,” said Alva. “It was the residence of the high priests who served the royalty who reigned over the island. People were free to come and go when they lived here, as long as they obeyed the laws of the time. It was considered a place of knowledge; you might even consider it similar to a university town. The uplands were heavily regulated at the time, due to the limited natural resources, so many people lived just outside the valley and came when they sought knowledge or religious enlightenment. Our moon walks are a cultural experience, an educational experience. We do these during our ‘summer’ times.”

For those of us on the mainland, summer just started a few days ago, but for Hawaiians, the concept of summer can be as early as April. They don’t have four seasons in Hawaii as we know on the mainland.

Upon entering the valley, chanters recite Oli Kāhea (Kū mai au he Hawai‘i) and Oli Komo (E hea i ke kanaka). They are used to ask permission to enter the land, approving that permission, and welcoming visitors to the site, with the hope that while they are experiencing the Valley they will be safe. It is a protocol which has been done throughout Hawaii’s history. “We do this protocol every morning that we work in the Valley,” said Alva “it is a traditional way to ask permission to enter into this place.”

Hawaiians call themselves Kamaʻaina (“child” (kama) of the land (‘aina)). The land is inextricably tied to Hawaiian culture and religion. Early Hawaiian religion resembled other Polynesian religions in that it was largely focused on natural forces such as the tides, the sky, and volcanic activity, as well as man’s dependence on nature for subsistence. Historian Pali Jae Lee wrote: “During these ancient times, the only ‘religion’ was one of family and oneness with all things. The people were in tune with nature.

The concept of being one with the land is somewhat foreign to western thought. Genesis 1:26 reads “And God said, let us make man in our image, after our likeness: and let them have dominion over the fish of the sea, and over the fowl of the air, and over the cattle, and over all the earth, and over every creeping thing that creepeth upon the earth.” In Western thought, the land is something to dominate and exploit. At the same time, Genesis also says “And the Lord God formed man of the dust of the ground, and breathed into his nostrils the breath of life; and man became a living soul.” So, this suggests we are part of the earth; the Hawaiian culture emphasizes this notion.

Technically, humans derive from second generation star dust; we are derived from the earth. We know every ingredient in the human body is made from elements forged by stars. Undeniably, the Hawaiians are right – we are one with the land. Everything in the universe is hydrogen and hydrogen build-up. Edward Robert Harrison once famously said, “Hydrogen is a light, odorless gas, which, given enough time, turns into p5eople.”

Western thought emphasizes our distance from, and mission to exploit the earth, and this notion appears to be detrimental to our very health. Dr. Denise Faustman, director of the Massachusetts General Hospital Immunobiology Laboratory, is working on a vaccine she believes can permanently reverse type 1 diabetes. The vaccine is made from a microorganism that actually originates from dirt. Who would have known? Faustman maintains the rise of autoimmune disorders, and the increase of food allergies and gluten intolerance, is tied to the fact that humans no longer interact with the dirt in the way they once did.

The Valley’s supervising organization is “grounded” in the land in most everything it does. Even its catered events are authentic to this mission. Nestled away, hidden above the visitor center to Waimea Valley is a secret little venue called The Proud Peacock. The romantic venue and its candle-lit lanai overlooks the main lawn. It serves as a specialty restaurant with a full cocktail menu. Its featured wooden bar was imported over a century ago from Scotland. All the wood in this venue was imported at great expense, arriving on a steamship from abroad. Alas, the venue is not a public restaurant, rather it is accessible only when there is a special, catered event, such as the Moonwalk night dinner. The venue can be booked for wedding dinners or charitable fundraisers, such as for the Kokua Foundation (which supports environmental education in the schools and communities of Hawaii).

The Proud Peacock is catered by Ke Nui Kitchen and Thomas Naylor LLC. Naylor is the local equivalent of Wolfgang Puck or Emeril Lagasse. Naylor was raised in the restaurant business. Starting with his grandfather, and continuing with his father and uncles, the Naylor name is synonymous with food culture and business dating back to 1924. Naylor has over a dozen years of experience in the food and special events industry. On the North Shore and rippling throughout Oahu, Naylor has garnered a reputation for excellence in culinary services, and most notably a commitment to his clientele. Ke Nui Kitchen strives to excel at providing creative and elegant dishes executed with locally-sourced ingredients, and farm-to-table cuisine. With island and regional influences, prepared with KNK’s attention to detail, they provide an unforgettable experience. The Moonwalk dinner was beyond all expectations; dinner on the lanai was romantic and unforgettable. All menu items are created from scratch. Every sauce is thoughtfully prepared in the kitchen – no cans, bottles, or frozen food. Sustainability is a priority. Ke Nui Kitchen uses local fishermen, and all ingredients are locally sourced from surrounding farms and use practices that are environmentally sound. The Ke Nui Kitchen team is highly trained and qualified, they are passionate about food, and continue to hone their craft. In Hawaiian, Ke Nui means “the long” or “the great.” Their vision is to bring a long-lasting and great experience to every event.

On our Moonwalk night, Ke Nui Kitchen conjured up a lavish buffet which included: beet salad with feta cheese and caramelized macadamia nuts; saffron rice; flank steak, medium rare with chimichurri sauce; crispy crusted chicken with salsa garnish and sauce; Okinawan sweet potatoes; marinated eggplant; lilikoi bars; brownies; and a platter of fresh fruits. Jennifer, the manager, told us one of her employees went out that very day and plucked the fruit to make the lilikoi bars. They were to die for! The ambiance and unique culinary selections make this a must-do dine.

A combination ticket for Moonwalk and buffet is very attractively priced. It is an incredible experience, especially with the rare opportunity to see night-blooming botanicals.