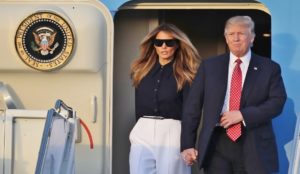 Far away from any Russian influence, US President Donald Trump may get a day to reflect and be overtaken by the Aloha Spirit. Although island police and military officials would prefer the President to stay at a less busy location, such as the Marine Corps Base Hawaii on Kaneohe Bay, according to White House officials, he will be staying at a Waikiki hotel. Speculations are pointing towards him staying at his own property – Trump Tower International Hotel Waikiki.

The Trumps will arrive on Oahu on Friday, November 3, causing a hubbub of activities and preparations, even though no specific time of arrival has been issued. Police were in Kahala this morning practicing motorcade maneuvers, as protest organizers – anti-Trump group Hawaii J20 – gets ready for a rally on Friday at the State Capitol.

Shirlene Ostrov, Chair of the Hawaii Republican Party, was in Washington, DC, yesterday to discuss Trump’s Hawaii visit with White House staff. She said the President will not be making any public appearances, although he will visit the USS Arizona memorial and receive a briefing from the US Pacific Command.

Hawaii Governor David Ige will be on the tarmac to welcome the President and First Lady, but there are no plans for an official meeting.

It has been known for 3 weeks that the President and First Lady Melania will be staying overnight on the island of Oahu on their way to the beginning of the President’s Asia trip which includes bilateral, multilateral, and cultural engagements with leaders from Japan, South Korea, China, Vietnam, and the Philippines.

The President will participate in the Asia-Pacific Economic Cooperation summit in Vietnam from November 11-12 and the Association of Southeast Asian Nations summit in the Philippines, which runs from November 10-14. According to a White House statement, Trump is expected to talk about economic ties with trade partners, as well as resolutions to the ongoing North Korea threat.