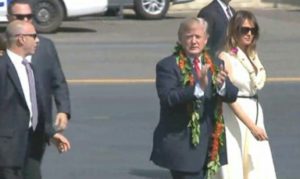 In 2011 during the APEC conference, US President Obama said he felt a little odd wearing a suit in Hawaii and was mostly seen wearing Aloha shirts in the Aloha State. Times are changing. Today, the most prominent tourists visiting Hawaii, US President Donald Trump and first lady Melania Trump, ended their busy, short trip to the island of Oahu in the State of Hawaii today with a visit to the USS Arizona Memorial at sunset – all dressed in formal suits.

He was greeted at the airport by Hawaii Governor Ige. His busy 19-hour day did not include golf or basketball, but a short visit and boat ride with first lady Melania to the Arizona Memorial.

They approached a wreath of white flowers — a gift from the couple — and watched as two sailors who stood beside it at attention placed the wreath near a wall of names of the fallen.

The couple stood for about a minute in front of the white marble wall etched with the names of the fallen during a wreath-laying ceremony, according to a White House media pool report. The Trumps then threw white pikake petals into the water where the remains of more than 1,100 Arizona crewmen rest.

Many Trump staff members also attended, including his Chief of Staff, retired Gen. John Kelly, and his advisor and son-in-law, Jared Kushner.

The President received his second private military briefing of the day from Pacific Command leaders after his 20-minute tour, and briefly attended a reception at PACOM Commander Adm. Harry B. Harris’ residence, where the Trumps visited with PACOM staff and listened to a Marine band, according to the media pool report.

The first couple returned to their Waikiki hotel, the Ritz Carlton, at 7:33 p.m., ending a nearly 19-hour day for the President, according to the report.

They will depart Saturday morning to spend 10 days in Asia.

President Trump took to Twitter to thank Hawaii for its welcome earlier today. “Thank you for such a beautiful welcome Hawaii. My great honor to visit @PacificCommand upon arrival. Heading to Pearl Harbor w/ @FLOTUS now,” he tweeted, using the abbreviation for First Lady of the United States. The tweet included a video of his arrival in Honolulu this afternoon.

Scores of tourists and residents, including protestors and supporters, turned out to greet the procession. Some “boos” could be heard as the President’s vehicle entered Waikiki; however, there were also friendly faces in the crowd.